As a parent, we are constantly asked to compare our kids to a standard, to the national average, even to each other!  There's not a week that goes by, I'm sure, that we don't wonder if our child is "where they're supposed to be" and up to par with other kids their age.  So, the concern is healthy and normal because if there is something wrong we want to and need to know about it.

The problem is when there really isn't a problem and yet we're pushing and worrying because we noticed someone else's kid performing a task our child hasn't even thought of yet.  I try not to be that parent.  Really I do, but that doesn't mean I don't notice things.  We got a hand-me-down train table a few months ago for Jude to go along with a new train set.  He was super excited about it at first, but as things went, he just didn't seem to know what to do with it.  I tried not to worry and hoped he'd get the hang of it.  Last week, before he had even eaten breakfast (which if you know him, you know he must be super excited), he was telling stories about the engines, putting tracks together and occupied for sooo long! 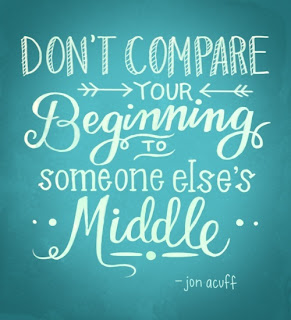 Yes, I guess, be excited that he's developing, but my point really is that so much happens on its own as long as the right elements are available.  Food, sleep, nutrients, attention, touch, love, time are all key elements that can inhibit development when they are lacking.  So, yes, in that way there is work that HAS to go into every child for sure.  But in the realm of 'first world problems', some of us get way too hung up on all the milestones and "how to prepare your child for X".  Give them plenty of opportunities to play with other kids, read to them like crazy, and play, PLAY, PLAY.

I'm continually surprised at children's development when you allow them to work at their own pace.  And, yes, though our society doesn't really practice it, that goes for adults too.  Instead of comparing yourself or someone else to where they should  be, highlight where they are beginning!  Encourage.  Demonstrate.  Give it some time. And then let people explore.  Who knows where we'd be if we just listened to everyone's natural pace.
Posted by Amy Butler at April 10, 2013