A Purpose of Parenting: To Balance Your Kids 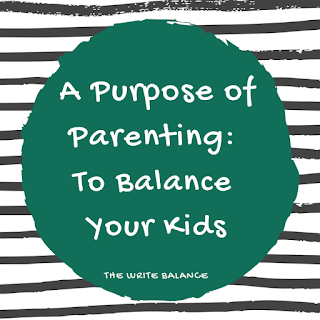 Over the course of about a week, the Race Car has taken up baseball.  This 1 year old kid is now running around with a foam bat (though he gravitates to the metal, heavy ones whenever he can) and ball looking for someone to pitch to him.  He moves the bat onto the left shoulder, hands gripped in good form and then crouches his whole body down (sometimes so low he falls over) ready for the pitch.  It's adorable and a little mind-blowing how fast he's picked it up, but incredibly consistent with his personality.  Just like his father, when he sets his sights on something he goes after it and sees nothing else. 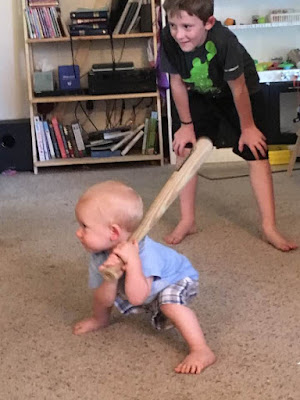 As I was reading to him before bed (something that is a struggle because he just wants to go, do and resist being still), I tried to work with him saying a couple of words.  As a typical third child, he's taking a little longer to get those words flowing.  It's especially hard with an extra talkative older sister who wants to be in the middle of everything.  The book was about tails so we worked on the T sound and then tried to get him to repeat the word.  Once I got the other two kids to quit interrupting, he gladly pushed out the T sounds and then grinned like crazy when I insisted at the whole word.  We finished and then he jumped up, turning around for a hug.  It occurred to me that I really needed to do that more often - work with him without the other two hanging all over him.  He does mama, dada, ball, go, and just recently mastered uh-oh, but he's capable of so much more if he would only slow down and try it.

And then the entire purpose of parenting came into focus.  We get hung up on different learning styles, disciplining methods and personality types, but the big picture is balance.  With each child God has entrusted to me, it has been my job to know them.  Knowing them means that I learn their weaknesses which should inform my parenting of them - show me where they need balancing.  I have 3 children and a husband who would rather go and do than just about anything.  In my relationships with them, I am learning to help them slow down.  The child that is afraid of hard things (even though highly capable of them) does better when they are forced to learn every aspect of that hard thing in order to master it with patience.  The child with all the words needs help respecting other people's need for silence.  This baby of mine is an amazing accomplisher and I'm learning it is my job to open up his awareness to other great things to accomplish, not just the ones on his radar.

Through conversations and maybe even some ad on Facebook, I've heard a lot of opinions about letting children decide for themselves about how they will be disciplined or what they will do or eat.  It seems to be a trend of some sort that suggests if a child doesn't prefer it then the decree has been set.  And I understand, to a point, because I want my kids to be happy.  I don't want them to resent me or have anxiety over something forced upon them.  However, I am seeing in all of my children the value of filling in the gaps between where they prefer to be and where they could be.

If I let her, my daughter would eat fruit non-stop and rarely have protein - if ever!  Do you know what kind of emotional wreck that girl would be if she didn't get enough protein in the day?  Seriously, she would be on her way to diet-induced diabetes.  As her parent, I see her weaknesses (emotionally and physically) and educate her preferences.  Last month we had some particularly stressful meltdowns regarding J and his math studies.  For that period of time, if I had let him decide he would never mess with math again.  It was hard (he thought) and didn't want to do it.  3 weeks later he's excitedly speeding through multiplication tables to impress his dad.  He just needed a little more patience than he felt like having that week.

Of course, there are always varying techniques on how to parent and carry out rules and consequences, but don't ever believe the lie that a child must like, prefer or be in love with everything they do.  It is our job to balance, equip and build up.  All of those things requires growth and that means change.  If your family never sets out to grow, then you are all likely to miss the mark.  Our relationship with our kids is meant for us to provide balance - a balance that keeps them rooted to the things that matter and that helps them choose wisely even when it isn't comfortable.
Posted by Amy Butler at November 19, 2019