I'm going to be 34 on my next birthday.  I just watched an episode of Parenthood where Kristina tells someone she's 34.  That can't be right because she's married, has 3 kids and, like, my mom's age.  Except it is right and for some reason I always see my mom about the age that I started recognizing her as a separate person - so somewhere around 34 probably.  Aside from the, "Wow, I'm old" feeling, it got me thinking about how easy it is to get stuck in time somehow, not progressing, but just assuming that everything is being tended to.  All the while, if you're not careful you quickly grow into the thing (s) you hate and denounce.

One of the things most important to me in my life is authenticity.  I hate small-talk and fake personas.  I'll even scoff at flowers that are fake purely on principle.  Come on, people, be real!  And yet.  And yet I have a confession to make.  I want so badly to keep you from thinking badly of me some days that I work my tail off to not be real.  My mind is constantly overrun by thoughts of judgements you may or may not be making about the real me.  How can I avoid them and what could I do/say to combat them or justify myself?  It's exhausting.  And a little disgusting.  I hate it when people won't just be honest with me when I ask them how they are doing.  If I didn't want to know, I wouldn't ask.  But then I get all twisted up in knots trying to say just the right thing so I won't sound pathetic or weird to you.  Why do I herald authenticity to the masses, but hesitate to tell you how much I hate cleaning my house and that I only do it because I figure you'll say I'm a bad person if I don't?

So, here's the deal.  Kid #1 liberated me in some really important ways.  Kid #2 is waking me up to the reality of how short life is.  With those things under my belt, I'd really like a reset button. 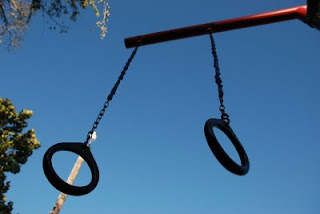 Let's start with life right now.  Summarizing something in a few sentences makes it seem easier than it really is.  My husband is getting his MBA while working full time and I have two kids, two dogs and teach piano part-time.  One sentence there, but that one little sentence is so much.  And so hard.  Having two kids is hard.  Doing anything else is even harder.  And I really want to do EVERYTHING else too.  I'm optimistic that it gets easier, mostly because everyone says so.  Until then, writing is the best way to keep me from stagnating and poisoning everything around me. (I can get pretty cranky)

What's your favorite motivator when life is harder than it feels like it should be?
Posted by Amy Butler at October 25, 2013