We think it's about being on one side or another.  We are convinced it's about proving our point.  We are often fed a diet of panic, despair and emergency that should result in change.  I'm pretty sure we have it all wrong.

The world will be debating truths and campaigning for their view as long as it is still spinning.  There's no doubt about that.  And yes, I have my own view about what's true and what's right.  We all do.  Why we are so shocked to find others who absolutely disagree with us, I just don't know.  So, it's not about disagreeing because that has always been with us and always will be. 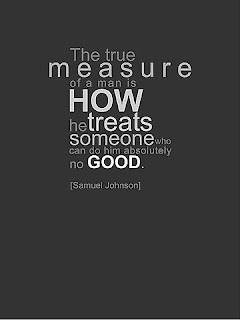 Here's what it IS about:  Treating people well.  Period.  Whether you disagree or are bosom buddies on every issue known to man, you should still be able to treat another human being well.  If your view of the world (and any little thing in it) is so vital, true and imperative, do you really think antagonizing or alienating someone will help them come to agree with you?

Human nature says no.  Doesn't make it reasonable or righteous.  But we just can't go around barking at  each other - no matter what we're saying - and expect change.  Most people, when they feel attacked, can't hear anything but their own defense.  When a person feels understood and valued, then they are more likely open to considering what you have to say.

You're wondering now if I'm in favor of ignoring the truth of someone's situation just to keep them from hurting.  No, we all have to hear hard things and ultimately it is up to us to either change or live with the consequences.

But we all know what it is like to be corrected with respect and dignity.  And what it's like to be bashed and brushed aside.  Speaking as a mother, there are ways to tell my son he is wrong that are healthy and useful.  Belittling, hateful arrogance is not involved and certainly doesn't do anyone any good.  Our world is continually changing and that alone can be really overwhelming.  But you know what?  So far, none of those changes has taken away my ability to treat people with respect and honor, even when they are wrong.  Don't be surprised when you meet those who oppose everything you're about.  Instead, look for ways to treat them well.
Posted by Amy Butler at March 29, 2013