Both Sides of the Bandwagon

Have you ever had a paradigm shift?  An Aha! moment?  Been convicted by a cause or a need?  Aren't they wonderful? A new realization that you've been missing all this time!  A calling for your life or a new direction to choose with passion!  That's great!  Becoming so passionate and so convicted that you began telling everyone you know about it?  That's great too!

But fast forward just a bit.  Have you encountered friends and family that are supportive, but otherwise unaffected?  Have you grown frustrated and possibly angry with them for not seeing this as life changing as you are?  Or worse, they don't get it at all and are now avoiding you.  And then in walks the judgement, the superiority and maybe pity for not being at your level.

We've all been there.  Sometimes, as it turns out, we are right about it all.  Sometimes, though, we're just getting caught up in a fad or mislead or confused.  Time tells either way. 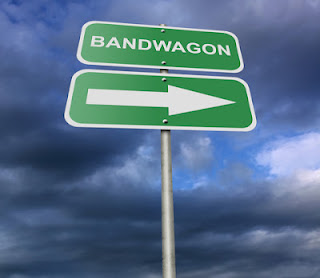 I believe in causes.  I believe in change and growth.  The danger is how we treat people in the process.  We rarely get everything right the first time and even if we did, that's no justification for shoving everyone that doesn't agree with you or see what you (maybe think) you see into the reject pile.  And let's be honest here - we all have personal revelations from time to time and at least half the time they aren't new or not even on target.  We are all fallible, so get rid of the smug faces and the condescending glances.  If you're right, time will tell.  You don't have to be ugly about it.

And when we are on the other side - when we don't see what the fuss is about or we think they've lost their mind - there's still no reason to be ugly about it.  Hear them out, consider if it's valuable, merited and why it would be important to them.  It's always good to keep lines of communication open, even when you might not agree all the time.  There's always something to be gained and learned in either direction.
Posted by Amy Butler at June 06, 2012