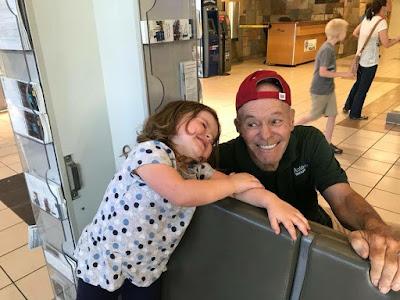 As we move through life, there are certain places and people that serve as beautiful background music that weaves in and out of our focus.  After my parents sold my childhood home, it took a few years but I eventually grieved over that house - imperfections and all.  I didn't appreciate all that it was until it was long gone.  Other times you know the value of something - or someone - and dread a day in the future when they won't be around.  This week a very special man, Lester Dougherty, died and has since changed the soundtrack of the lives who knew him with his leaving.

One of the most memorable things about growing up in the church of Christ is the singing.  I have been blessed to be part of congregations who could sing and sing well!   But that doesn't happen by accident.  It happens because of people who not only love singing, but they pursue it in worship and outside it.  Lester has always been one of those people.  With a smile and a twinkle in his eye, I have witnessed him lead songs over a thousand times in my lifetime.  Even with illness here and there over the last few years, that has remained a constant image.  Since I've never been without that image for very long, it just doesn't compute that the song is really over.

In our very technology and media heavy world, you see skills being passed down from generation to generation less and less.  I'm so proud and thankful to have witnessed Lester's sharing of music with so many, including my children.  Just watching him lead songs and sing in their few years has begun the groundwork for many years to come.  Sometimes I think it was even without trying.  He had an enthusiasm and joy that can't be taught and you just don't see very often.

I was telling J good night and he told me - without me even asking him - what his favorite memory of Lester was.  "I remember that time he taught me that great trick.  He would put a quarter on his elbow and then catch it.  But he would tell me to close my eyes and he would put it in my pocket!  I loved that!"  His song-leading is iconic in my mind, but even more he was a very good man.

There is so much power in your influence.  I have been so blessed by Lester's.  Don't waste yours on things that don't matter.  Use it for good.
Posted by Amy Butler at November 03, 2018