Maybe Popularity Is the Last Thing You Need

One of the most universal desires is the need to be well liked.  From elementary school to the senior center, there will always be questions about fitting in or being like everyone else.  Starting around middle school and escalating through adolescence into adulthood, we all battle with cliques and feeling accepted by our peers.  It's natural. Often there is even a need to sacrifice minor preferences to encourage camaraderie and friendship.  The trouble is that fitting in quickly turns into an idol, sweeping away identity, character, and morals if we're not careful.  Parents, in our own insecurities, feel desperate to get the latest whatever for our kids so they might blend in and avoid childish scorn for being different.  And, honestly, I get it.  I have always hated feeling different or left out.  Pick a category in life and I - at some point - felt negatively different than those around me. Unfortunately, my most defining memory from adolescence was the first one.  My first weekend away from my parents with friends and because I decided to 'like' the wrong guy (at least I think that's what I did wrong), I turned into the least preferred person and they fought over who had to sit by me in the car. Talk about trust issues, huh? :)  Believe me when I say that I understand the innate need to be liked and accepted.

Still, when we get caught up in always making sure we or our children are 'flying under the radar', we are losing out on the more important things.

1) Empathy.  When life doesn't ALWAYS go your way, you learn what it feels like.  Then, you can empathize and help others when life doesn't go their way (because it happens to everyone eventually).

2) Stronger Identity.  Popularity often requires your identity to be shaped by the masses.  Those masses, even the well-meaning ones, aren't usually around for very long and when they are their opinion changes.  When we are forced to decide who we want to be, in spite of the crowd, it really means something and sends out roots for a person of worth.

3) Above Average Results.  Going with the grain here in America, right now, will usually result in being an average American.  Average Americans are sick and out of shape, in a large amount of debt, addicted to something, unfaithful in their marriages, disconnected from their family and entrenched in illegal activity.  Unless we are intentionally working to gain the opposite of these, this is where Americans are naturally arriving. When we learn how to not fit in, we are learning the skills and discipline it takes to succeed where others don't.

Like so many things, a good life is a balanced life.  Is it wrong and awful to be a popular kid in high school?  Or is fitting in - maybe just because you're a likable guy - going to ruin your life? No and no.  There are lessons to be learned and opportunities to be taken on both sides of the cafeteria.  Let's just remember that being a good person far outweighs being an accepted person.  Some days I have to choose between the two.  If I don't recognize many of those days, then I'm probably choosing the latter by default. 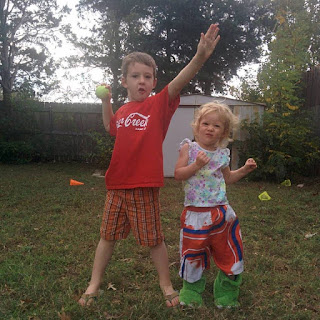