Warning: Birth stories aren't everyone's cup of tea so if you're not into details just skim or skip altogether!
Next week we're going to talk all about babies from pregnancy to birth order since it's all fresh on my mind.  To kick things off, here's my childbirth experiences with my two kids. 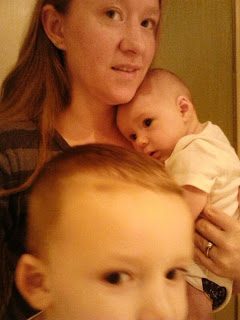 If only we could all start with the second time around!  Once you've done something, at least once, it makes more sense.  The advice others give you actually computes and you feel a bit more capable.  This was the case with me.

When I gave birth to my first born J, it was like trying to give a cat a bath.  Before the real contractions set it, I was convinced that it wouldn't be that bad.  Truthfully, I needed to believe that otherwise I would have been in full panic mode.  Thankfully, that came later. :) Everything about this labor took longer.  My water broke one day and I didn't give birth until the next.  Labor started in the wee hours of the morning and he was born at dinner time.  Pushing was almost 2 hours.  Short compared to some I'm sure, but to this girl who had expected a baby by lunch, way too long.  But of course, I made it longer than it had to be because I was so frightened and tense that I mentally (and thus physically) ran in the opposite direction.  There's only one way out and I was trying to avoid it like the plague.

So, the entire experience around J was long, hard and stressful, but there was this one, most beautiful thing about it all.  Once the real contractions began, I didn't think I could do it.  Any of it.  If it wasn't coming right then, well, I couldn't do anything different.  So, therefore, it wasn't happening.  I gave up and looked for a miraculous short-cut somewhere.  The most beautiful thing? I did do it.  In my living room, with Mr. Butler's supportive arms around me and no drugs, I worked harder than I'd ever in my life and gave birth to a beautiful (big - 9 lb 4 oz) boy! 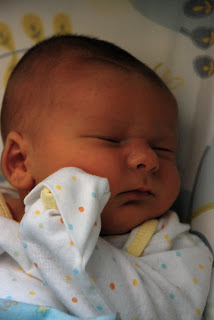 When Miss Z was born, things were practically perfect!  But then why shouldn't they have been? I had many factors working for me this time around - I was in better shape, I knew I could do it again,  I had prepared with hypnosis (Blissborn worked beautifully for me!) and I was just prepared this time.  My due date had come and gone so by when the day finally came we were skeptical of everything.  False starts seemed to be the only thing I ever talked about anymore!  I woke up early to real contractions every 15 minutes for an hour and a half.  We alerted some folks and then they promptly quit.  As in nothing.

Still, Mr. Butler stayed home from work and my mom came over.  I walked, ate, and rested.  We agreed that if things weren't happening by lunch time then he would go back to work.  As if like clockwork, lunch time comes and the contractions start in.  So, what do we do? Snack and play trivia pursuit!  Everything was 12-17 minutes for a while.  Around three (times and lengths are a bit sketchy so forgive me) the contractions are more intense and 7-10 minutes apart.  My mom, who over-prepares, gets a bit nervous, thinking the midwives should be called.  Mr. Butler, who under-reacts to everything, delays calling, thinking we have a while.  And why shouldn't he think that?  It took hours to get from where I was right then to actual pushing.  A few minutes labor the contractions dropped to every 4 minutes or so.  Needless to say, he called.  And then couldn't get a hold of anyone.  So, there was mild panic for a little bit.

After that, things get a bit fuzzy mostly because everything went so fast! About the time the midwife (and attendant) got there, we sent Jude with my sister-in-law down the street.  Before I know what's going on, they are trying to get me to lay down - which I didn't really want to do only because I didn't want to mess with what was working.  But, I had been standing for about 3 hours.  They had a good point.  As I lay down and rest a bit, they checked me and I was dilated to a 5.  Not too shabby, but only halfway there. The contractions grew harder.

You're told that when you get the urge to push, go with it.  Well, I never felt anything like that with J.  I was a basket-case and the only thing I felt with him was "Make it STOP!"  So, as I'm laying down my body starts having a mind of its own and I'm certain its NOT time to push because it was too quick.  And yet, it just wouldn't quit.  So, approximately 30 minutes after they checked the last time I had since dilated all the way.  I was ready to go and this baby was coming.  Mr. Butler and I both were in shock! Less than 30 more minutes (of pushing) and Miss Z surprised us even further.  She arrived at 5:34pm and she was a girl! 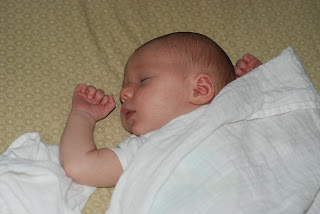 Night and day I tell you.  What's so neat is how much (so far) their personalities mirror their births.  J is loud and big.  Miss Z is clear and calm.  And they complement each other and us so beautifully.  God is so wise and good. 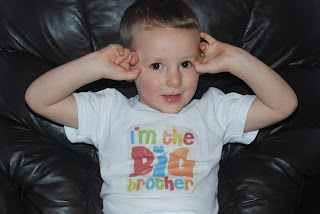 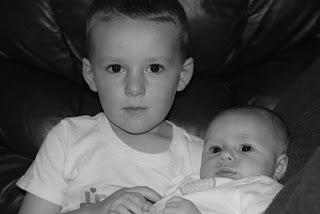