Parenting: Lessons From the Field

As I've mentioned before, I was (am - you never really grow out of it) a strong-willed child.  Mr. Butler is a really strong personality, but not necessarily strong-willed in the sense of resistance and negative behavior.  So, when baby Butler came along we've all just waited with anticipation to see what the result would be!

J is definitely one to get his feelings deeply hurt (he gets that from me) at the sign of NO, but he's also one to let it go pretty quickly if we don't feed into it (he gets that from his dad).  So, he has thrown a few royal fits, but we're not strong-willed certified yet.  Yesterday, though, was certainly a step in that direction.

J had been fed, changed and been playing.  I sat down at the piano with a set plan and needed to complete it - approximately 12-15 minutes worth.  As soon as I started playing, he rushed in there to apparently squash all the good intentions I had just mustered up! :)  He instantly started fussing and pushing his way between the piano bench and piano.  After about a minute of trying to ignore him, it became obvious that he would not get bored and move on. 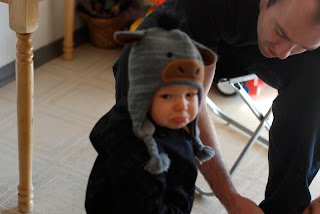 It quickly felt like a moment to put my foot down.  He was fine and I needed to do this.  So I did the most logical thing I could think of (ha!) and propped my foot on the edge of the piano in such a way so that he could not reach the keys or crawl under anything. He didn't like this at all - not. at. all.  But since I could easily still play and keep him back, I continued.  About 3 times I had to pick him and set him in the hall.  Then it was getting ridiculous (because playing the piano with one leg propped up isn't silly enough) and I took him all the way back to his room, telling him that if he needed to cry or throw a fit to do it in here, but that he needed to calm himself down one way or another.  I gave him his pacifier and blanket and left.

I went back to the piano and finished my work.  There was silence after a while and I reached a stopping point.  The scene I came to in his room was certainly photo worthy, but I didn't take the time.  He had curled up in front of the rocking chair in his room on his blanket and was just laying there.  Not asleep, not crying, just resting.  When I walked in he didn't scramble up to me or even lift his head.  His eyes turned to me and smiled.  I picked him up, rocked him, read a few books, prayed with him and put him down for a nap.

Victory!  One of the challenges of a strong-willed person early on is requiring them to soothe themselves and accept NO.  I still struggle with both.  This incident was a good example of how to discipline -consistently, not out of emotion, capped with love.  I'm sharing this because so often it doesn't look like this.  My emotion sky-rockets and the discipline comes from anger.  Checking myself BEFORE I start yelling out orders seems to melt all of the "bad parenting" away.  Now if I can do it again and prove yesterday wasn't just a fluke!