Rebellion.  I'm not a parent of a teenager and I haven't pulled somebody out of their rebellious fit, so I don't have answers when it comes to a rebellious spirit.  What I do have is some observations of what doesn't work and then my own heart that is tempted with rebellion from time to time.

Rebellion defined: The action or process of resisting authority, control, or convention. 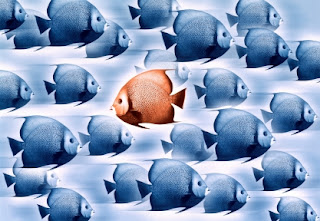 Personal rebellion isn't usually organized or reasonable.  It's emotional.  Pride and self-preservation are fierce competitors of being told you're wrong, for any reason, in any situation.  Humbling a rebellious spirit isn't something that just happens or someone can be pushed into.  It takes a relationship, kindness and a whole lot of prayer.  And even then it can be a gamble.

So, here are a few things that I've never seen work (on myself or anyone else).

Nagging: It's good to make your position known and clear.  But once that is done a constant chatter of how wrong they are usually just swells up the rebellion for rebellion sake.  If boundaries should be involved, enforce, but don't be a broken record.

Smug Looks and Condescending Words: Maybe you are 100% right and they are sooo wrong.  But an "I told you so" or a "You'll see" is not going to soften a rebellious spirit.  Ugliness on your part can only strengthen their feelings against you, no matter how right you might be.

Beating a Dead Horse: Whether it's a 16 year old with an attitude or a grown man with a vendetta, saying or doing the same thing over and over isn't the solution you're looking for.  With reckless and unwise behavior, lines sometimes have to be drawn and subjects have to be revisited.  But if you catch yourself taking the same approach, the same song and dance with no results, no apparent effect, then take the hint and do something different.

It seems pretty common that when someone disappoints you, you assume that if they just understood why you're upset with them then they would fix it.  And even more often when they don't seem interested in fixing it, we assume they must not have understood us the first time.  Maybe, but probably not.  Right or wrong, rebellion is emotional, rash and not easily controlled from without.  It's a heart problem.