How Much is Your Time Worth?

Clearly, I've not been as dedicated to posting as when I began this year, but for good reason, I guess.  I'm very blessed to be able to work part-time from home, especially when kids come, but it seems I'm making up for it by being haunted by most-of-the-day sickness.  Anyway, all the things I need to be doing (writing, reading, praying, working out, etc.) and would benefit from, seem to be the last things my self thinks of or is willing to do. Why is that?

Pregnant or not, we're like this all the time, aren't we? Isn't that part of what Paul says - 'I do the things I hate...' Right now I feel sick most of the time and mental energy is fleeting so that explains a lot.  But as a kid, I wanted to play the piano very well. I really did. But I did NOT want to practice.  I didn't want to put in the time or effort.  Maybe that's one of the side effects of our time. Technology has launched us into 'time-saving mania' and suddenly we don't want to spend any time at all on anything!  Don't have time to cook, don't have time to read, don't have time to exercise, etc. We'd all probably do it if we could just push a button.  And then for me, it spills over into relational things.  Forgiveness, unconditional love, service - all things we would like to say are part of our character, but how much do we actually spend time cultivating and doing? Forgiveness, at least for me, isn't something I can push a button and just do, especially when I've been really hurt by someone.  Any aspect of the fruit of the Spirit, at least for me, is something I have to work on over time. And that's the part I hate about it. Why can't I just go to the store and get some forgiveness and be done with it? It would be a lot easier! :)

It really is a fine line we walk though.  Whether you approve of it or not, living life in 2010 is busy and complicated.  We live, work, visit, etc. all over different towns usually so half our time is spent driving. And we go and do more than ever with hobbies and sports and whatever else. So, prioritizing time is mandatory, but you can't push the important, WORTHWHILE things out of your schedule b/c you don't have time either. We live in a quandary, I suppose. 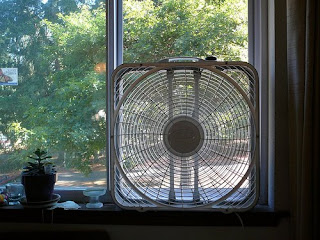 On a nostalgic, happy note, we've been sleeping with the windows open at night and last night needed to pull out the box fan.  For me, the sound of a box fan, especially on the low setting, sounds much like an air conditioner window unit - exactly like the one my grandparents had at their house in Healdton, OK.  Etched in my memory is a hot, summer day as a kid spent at their house, coming inside and sticking my face in the middle of it.  The sound combined with the cool air and the freedom of life is a memory that has yet to leave me. So, last night sleeping with a box fan momentarily convinced my mind that it was summer, no responsibilities and certainly no worries - a thought everyone should begin their day with. :)
Posted by Amy Butler at April 07, 2010