We Need To Tell Stories 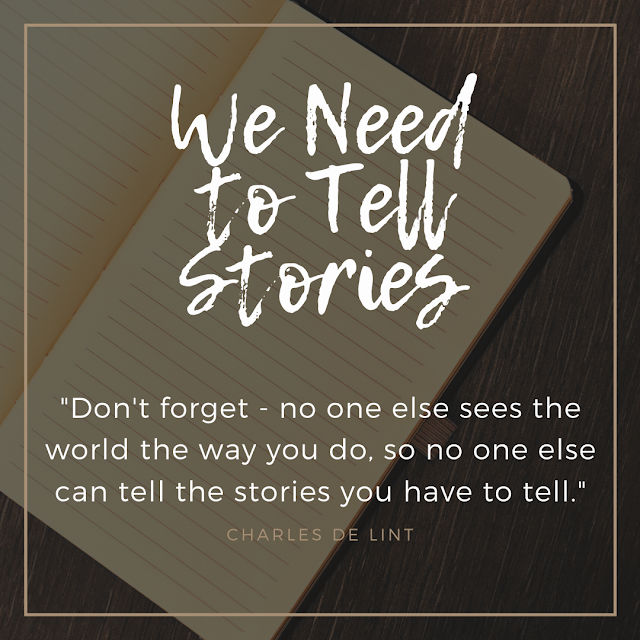 When I was a junior in high school, my English teacher spent pretty much the entire year on Native American literature and writers.  Living in Oklahoma, that wasn't a surprise really, but the amount of time we spent learning about the history and culture of our state's ancestors, especially in an English class was unique to that year alone.  I have always loved discussing literature and the context a writer is coming from so I enjoyed this class for the most part, but by the middle of the second semester I got pretty weighted down from the content.  If you're not familiar with Native American History, let me suffice it to say that there was a lot of injustice and abuse that the effects of can still be seen culturally today.  After that year, I certainly lost my watered-down Disney's Pocahontas perception of Native American History.  It was sad and sobering and eye-opening.   While I don't have any direct family connection with a specific tribe, I've certainly learned that most native Oklahomans are intertwined historically and often racially with Native Americans.  This specific line of history has always reinforced the melting pot analogy of America.
Growing up, I went to Oklahoma City Public Schools from K-12.  Since my graduation in 1998, the population has changed even more, but throughout my time there it was very diverse.     My parents were invested in my life and always supported me throughout my education.  A lot of the kids I went to school with didn't have that luxury.  The typical scenario was parents attempting to be invested by racing up to the school to chew out administrators because they dared to expect any amount of responsibility out of their child.  As a result, the administration walked around on eggshells, trying not to upset explosive parents and thus was very little order on the whole.  It didn't help that, compared to some of the school districts around us, we were often on the lacking end of things.  The disparities between income level, investment level and cultural push back saturated everything.  So I don't tolerate snobbery very well, no matter what direction it comes from.  I was raised in an environment where I saw privileged people be mean and impoverished people be mean.  I saw poor people walking around with the entitlement chip on their shoulder and rich people do the same.  I also saw minorities full of kindness and the whitest, richest, most privileged guys full of kindness.  My high school was the opposite of rich and I was very aware of that.  Crumbling buildings and some rooms without air conditioning was normal so when they remodeled the school shortly after I graduated, you can understand my bitterness.  It wasn't something to be proud of sometimes, but it also wasn't the worst either.  I have some awesome memories of drama class and all the productions I was involved in.  There were some great teachers that I'm so very thankful for. I didn't fear for my life, even though we always had metal detectors.   I went on to graduate college (twice) even though I would never suggest anyone send their kids to that school district if they had the choice now.
We all have a tapestry of experiences that shape us.  The history we learn.  The attitudes we witness.  The people who choose to share with us.  The systems that work for and against us.  We all have stories.  Just like there are some books I would never choose or enjoy reading, it is still important to record a perspective.  You might not care for or about my story about being a mid to lower income white church girl going to a public school in the inner-city, but since I was there living my life, to someone somewhere my perspective matters eventually.  Telling our stories to fill in the entire picture is paramount.  There are a lot of people saying a lot of things right now and I am not interested in arguing with anybody.  So, I'll let everyone else do the debating because, honestly, they are probably going to do it anyway so there's little value in adding another hollering voice to a brawl.  Instead, I just want to encourage story telling.  One of my dreams is to craft a series of essays that highlight some really neat stories I've encountered in my life.  Homeschooling three kids kind of puts a wedge between reality and dreams for a while, but I'm trying to get closer.  If you have a story that you would like to be told and would be willing to let me help tell it, please contact me.  I don't have answers for most questions, but I serve an amazing God that has given me a very large bag of empathy that I don't know what to do with some days.  Maybe some of that bag is to help you tell a story that needs to be known in our broken world.  Maybe, maybe not.  But I'm willing to share perspectives in hopes of filling in these divides with mercy and honor.
Email Post
Labels: perspective Story Telling

Resolution: The Only Way To End a FIght