Disclaimer: I received a FREE copy of this product through the HOMESCHOOL REVIEW CREW in exchange for my honest review. I was not required to write a positive review nor was I compensated in any other way. 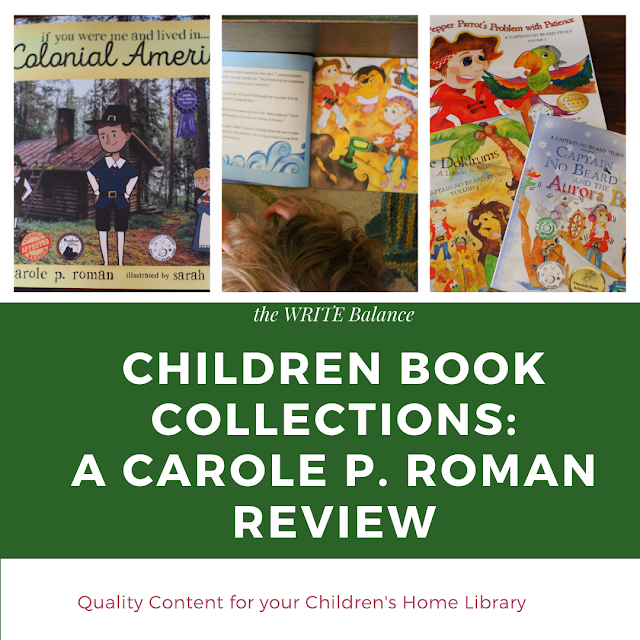 With all of the complicating and often destructive influences in our modern culture, I am continually on the look out for quality content for my kids.    As a parent, I see how valuable it is to have character reinforcement in more than one area of my children's lives.  The content they consume helps shape who they are. Since I know that to be true, I need to know what books they are reading and what kind of virtue (or not) is being encouraged.  Today's review is a gold mine in that department! Carole P. Roman is a children's book author that we have reviewed before and loved! This time we were generously given our choice of 4 books from the Carole P. Roman's assorted series and we were happy to add to our library. For our 4 books, we chose 3 volumes of the Captain No Beard series and 1 volume of If you were me and lived in series:

All 4 books are paperback with plentiful color illustrations.

The Captain No Beard series is an adorable collection of books based on a child imagining he is Captain No Beard and going on adventures of all kinds with his cousin and animal cohorts from his bedroom.  In a Calvin & Hobbes type manner, much more happens in Captain No Beard's mind than in reality, but that doesn't hinder his imagination!   This series is great for preschool aged kids, but my big kids enjoy listening to them with their little brother.  In addition to encouraging imagination and creativity, each book we have read teaches some kind of lesson. Pepper Parrot and Stuck in the Doldrums make the lesson clear in the title.  The Aurora Borealis is about stealing of all things!  Captain No Beard decides he wants to take the Aurora Borealis home and being the pirate that he is, it takes some convincing that it stealing such a thing isn't practical OR right.

The if you were me and lived in... series is a collection of books that highlight different places around the world and puts history and geography into a storybook form. I chose Colonial America because my we studied US History last year and I thought this would be a fun refresher of some of the things they learned.  It is a bit thicker than your average paperback storybook and includes a glossary in the back.  The glossary is pretty impressive with a few words that I had never heard of or understood their meaning in that context.  I had never heard the term breeched which meant when a boy is finally allowed to stop wearing gowns and moved to pants.  The book covers all aspects of colonial living like new government, travel, history, farming, Thanksgiving, clothing, and schooling. Before the
glossary at the end of the book there are two pages of people who influenced the colonies and some information about them, including people like William Penn and Myles Standish.  Books in this series are great for elementary age kids who are starting to travel the world through their education.

Since we were familiar with these book series, everyone was more than happy to sit down and read these.  The Colonial America book is pretty dense sometimes we would only read a few pages at a time in order to digest it all a bit better, but not a problem for my 9 year old to read on his own.  It's a great way to communicate history to kids in a simple and interesting manner.  The Captain No Beard books are perfect story time additions  so we didn't have any trouble reading through the entire thing in one sitting.  As my kids get older I know that Mom and Dad saying something is right or wrong can get repetitive, even in the best of dynamics.  It's really important to me that Biblical and virtuous principles are coming into their hearts from all directions and the Captain No Beard series is a great addition to our library that we can feel good about!


There are a ton of books available from Carole P. Roman and the Crew reviewed a LOT of them. Check out other reviews to find out more!
Posted by Amy Butler at March 12, 2020

Thanks for reading and reviewing the books. I'm glad they entertained the whole family!