A Day in Traffic Court

Back in May, I got a ticket for speeding in a school zone.  All three kids were in the car and we were on the way to the store.  It was a route I had taken many times before so I had no excuse other than I was in a hurry and not paying attention.  The officer was very nice and even knocked the offence down so it wouldn't go on my record.  The kids were a little freaked out at first because they had never witnessed that before, but it was a wonderful real-life teachable moment about consequences and following rules.  A couple of weeks later I sat down to pay the fine online, printed off what I thought to be a confirmation page and moved on with life. 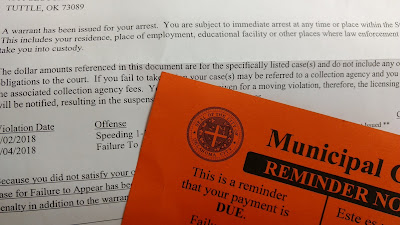 As it turns out, what I printed was just the submit payment page and my payment never went through.  There was no official record that I even tried to pay it, except for that printout and browser history.  But until last week when I received a letter from the city court informing me I have a warrant out for my arrest, I didn't know that.  Not only was there a warrant, but my $170 something fee turned into $590. Mr. Butler made a few calls, but facts were facts.  I either had to pay the larger amount or go stand before a judge and request part of the fee to waived.

So, let's just start this part off by saying this is one of my worst legit nightmares.  I've always had a reoccurring dream about being accused of something and not either getting to defend myself or not being believed when I do.  So standing before a judge telling him I really did try to pay my ticket and it was merely an oversight doesn't have much chance for success in my dreams.  Not to mention it's highly unlikely I'll even be able to put coherent sentences together fast enough to explain it in the first place.  So, seriously out of my comfort zone.

Mr. Butler was gracious enough to stay home with the kids (because can you imagine taking my circus in with me?) so I could try to get there early and over with quick.  Traffic was fine.  Parking was fine. My first stop was a customer service window in the courthouse.  The attendant listened kindly to my situation and confirmed what we had been told, "Only the judge can reduce fees."  His recommendation - no joke - was "Talk clear and quickly.  Maybe the judge will look at your papers (I brought my browser history and the printout).  Good luck!"  Good luck? Talk about sending more panic through me!

I found the room and the anxiety instantly started spiraling out of control.  I walked in and felt like I was on Judge Judy.  It was a courtroom, after all.  There were pews for the audience and waiting 'cases' and then a swinging door into the lawyers seating area.  In the middle was a microphone and podium where you were to plead your case.  The judge was an older man (60's probably) who mumbled a bit and was a little hard of hearing.  Something ELSE not in my favor.  The more nervous I get the more I'll mumble and speak quietly.  What I wouldn't have given for a "Beam me up, Scotty" opportunity right about then.

There were about a dozen people who went before me with various situations.  I certainly wasn't the worst dressed person in the room, but I felt like I was the most terrified one.  Thankfully, as each person was addressed, the judge was fair but kind.  He was interested in efficiency and didn't mince words, but never demonstrated harshness or disdain.  By the time I got up there I had witnessed him dismiss partial fees on over half of the complaints.  I had hope at least.

By the grace of God and the Holy Spirit calming my mind and giving me appropriate words, when I was called I did what needed to be done.  He didn't ask/need to see my papers either.  He waived all of the extra fees save $20 worth and even extended the payment  due date until October.  He was nice, the entire time spent in his presence wasn't more than 3 minutes, and I didn't shed a tear.  The waiving of fees and extension of due dates may be customary as long as you show up, but I had no way of knowing that going in.  So, the end result was a huge blessing to me.

Later that day, I went and voted too.  It was a very civic duty kind of day.  I'm not big into politics and I pray I (and my family) will always live a life that avoids legal conflicts as much as possible.  So, it's really not my thing, BUT I am so thankful for a political system (while not perfect) that often provides a safe and protected society for those that seek to do good.  This day certainly enhances my appreciation for what we celebrate on the 4th.
Posted by Amy Butler at June 28, 2018