Like most things in my life, the needs and interests of homeschooling ebb and flow.  There are periods of freedom and then some of serious structure.  When I was pregnant with the race car and very sick, school looked different for a while.  J and miss Z thrived just the same, but there was more real world education some days.  Now that the race car is 1, life has slowed and gaps have shown themselves.  Since J loves reading and has always done well in that area, we definitely went light on language arts outside of reading.  When this review of Memoria Press came along, I knew I wanted to try their new spelling series! 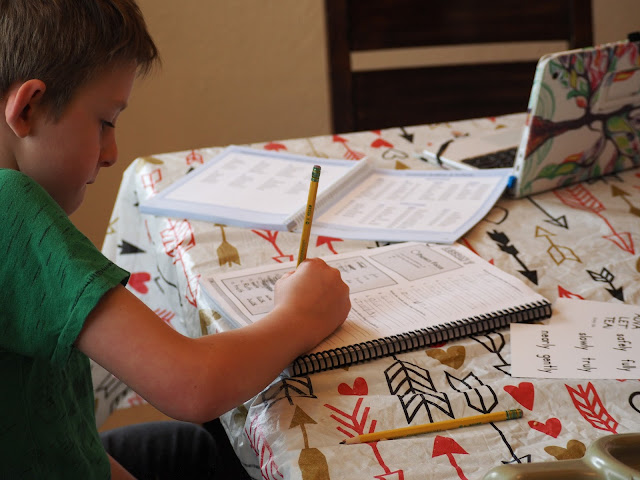 How We Used It:  We started at the beginning with Lesson 1 where he is introduced to a list of words by categorizing them by a particular phonetic component, such as words that end in -ly or begins with a consonant blend. The next section requires the student to color code each part of the words to reinforce the phonetic components. Each lesson continues in the same way, with the following page being some kind of at-level reading that includes several of the lesson's words in it.  These readings include all kinds of topics from recipes and how to make butter to famous people of history.  Following that is a section of fill in the blank using list words.  The final activity is dictation that includes all words and a final sentence.  We followed this pattern and generally kept to one lesson a week.  The flash cards and the Classical Phonics book were mainly used in reference, especially when labeling or explaining new components like a consonant team, something we had never talked about like that before.  The dictation section often served as the spelling test when he would get all of the words right.

What We Liked About It: When completing all the activities, it is difficult for the student to just race through it, which is what my son would rather do.  He is very smart, but would either rather conquer it or simply move on to something else.  Even though he didn't always enjoy slowing down to complete all the sections over the same set of words, it required him to really let the details soak in, which has really payed off in other areas of school.  I also appreciated the reading section and fill in the blank section that truly gave the words a context, something that is easily left out in spelling.

What Didn't Work For Us: The flash cards and Classical Phonics book were only mildly useful so far, but that may be because of the level my son is at.  If he were younger and/or struggling more, I could see them being very useful.

The Homeschool Review Crew reviewed several other products from Memoria Press and one of the subjects they are known for is their Latin programs.  Until this review, I had never really considered using a Latin program in my children's curriculum, but I've been sold on at least trying their introductory program, Prima Latina, that teaches English grammar along side Latin.  I'll have to let you know how it goes, but be sure and read the rest of the Crew's reviews over their entire Latin program, Traditional Spelling I and Music Appreciation I.  Talk about a lot of interesting options!