One of my most favorite things as a kid were birthday parties - especially mine or my brothers.  My mom did a great job every year making the whole thing special and fun.  So, of course, doing the same is important to me.  Doesn't mean I'm great at it, but it's important to me.

Well, in the spirit of full-disclosure, I'm so not prepared this year for J's birthday (which is Sunday, party Saturday).  I'm so unprepared that yesterday we just changed themes from Blue's Clues to Thomas the Train.  Sometimes I hate taking the easy way out, but in this case the easier way was the only way to survive! To get Blue's Clues related decorations you either have to order it from Etsy type places or make it yourself! And when I glanced around Party Galaxy yesterday, there was loads of Thomas stuff.  It didn't hurt either that I was getting super overwhelmed, Jude was running around like a crazy and when I asked him what he would rather have Baseball, Blues Clues or Thomas, he practically yelled Thomas! 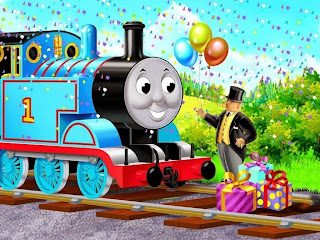 It's not like it really matters in the grand scheme of things.  It probably doesn't even matter in the tiny scheme of things.  But letting go and just rolling with it was a big deal for me.  I want so badly to be thorough, detailed and IN CONTROL that I dismiss ideas and options too quickly sometimes just because they aren't ideal or perfect.  But I'm being forced to accept my reality in a lot of ways, whether I like it or not.  And one of those big realities is that in this season of life (two small children, part-time work, husband in school and under job

Ugh.  Just saying it makes me scoff a little at the thought.  I just hate it, but I'm learning to accept it.  And don't get me wrong, there is nothing wrong with Thomas! ha! It'll probably be more fun and festive than Blue's Clues anyway.
Posted by Amy Butler at November 05, 2013