Childbirth: Know All Your Options

Recently (as in over the last nine months), I watched the television show Frasier from beginning to end.  In addition to getting attached to characters, it was so interesting to see social and cultural changes over time in a sort of fast forward.  Cell phones grew smaller, talk of the internet grew more common and something near the end of the show - as Niles and Daphne are preparing for the delivery of their child - struck me funny.  They considered (out of elitist pressure, I think) hiring a doula to attend their birth, but in the end decided not to because Daphne didn't want a natural birth.  What was funny was how they attempted to portray a doula as something so outlandish that the audience is expected to think it ridiculous.  Less than a decade later, things such as doulas, midwives, and home births are common place and are showing up on everyone's childbirth 'menu' nowadays. 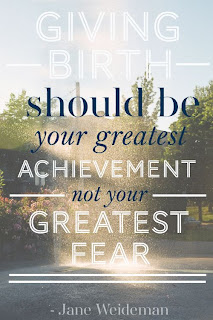 That's one of the things I'm so thankful for in the day we live in.  We have options. So many options.  In case you haven't looked into childbirth lately, there are a lot of options available which means a lot of decisions to make.  While that can be overwhelming at first, you and your family are much better off fully understanding what you're saying yes and no to.  Everyone has a different circumstance and it is vital to know what's available to you.  In short, do your research - you won't regret it.

For those in the OKC area, here are some people I would recommend, if you're considering using their line of work.

One of the things you say as and hear from new mothers is "If I had known...then I would have done things differently."  If you have questions, ask.  If you are unsure, find out.  If you don't know what you don't know, then spend time chatting with other moms.  If there's one thing moms like to do, it's share their experiences.  So, do yourself and the precious children you may one day bear and know all of your options!
Posted by Amy Butler at September 16, 2013