How to Brighten Your Day: Bird Style

So, they say it's the 'little things' that make all the difference.  I don't know if it's going to change my world by itself, but it certainly has given me a lot of joy! If you don't care about animals (first of all what's wrong with you, ha) then you might not appreciate this that much.  I have always enjoyed putting up bird feeders at our house.  The trick, as with everything, is continuing to put bird food in.  I did some work outside over the weekend and installed one of these with a regular bird feeder on my bathroom window: 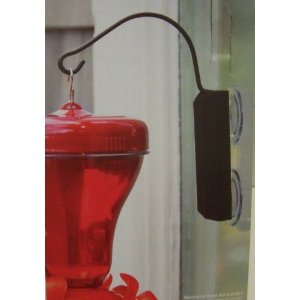 It was something I found last fall at least and obviously hadn't been in a hurry to use.  Well, if I had only known! Because it's relatively small, the feeder hangs right over the outside ledge, requiring most birds to sit on the ledge or on the feeder up against the window.  As a result, I get little birds hopping all around my window within a foot (sometimes less) of my eyes! A few have already acknowledged my existence, I think, and continued anyway.

Yes, it's small, but it made my day two days in a row! It's a great thing to do for someone homebound, sick or just anyone needing a little more joy in their day!
Posted by Amy Butler at February 28, 2012