One of the most treasured things in a person's life is usually words from a loved one who has died.  A letter from a parent or grandparent is just more special than I can express.  Everyone loves letters written specifically for them, no matter the age.

As a teenager I was always fascinated with finding a journal in a secret wall or buried in an attic that would be full of some persons writings, maybe even written to me, the finder.  Because of that, I LOVED keeping journals, still do. 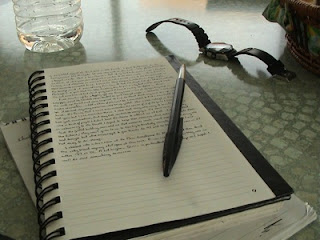 When we decided to get pregnant I found the perfect little notebook with trees and owls on the front and different wooded scenes on every page.  Ever since we confirmed that I was pregnant I've been writing to J every so often - usually a couple of times a month if I'm doing well.  Now that I've been at it for over a year an a half, I'm so glad that I did.  It has captured parts of me that fade so quickly and are forgotten.  The excitement and fear about being a mom.  The lessons I want him to learn.  My reactions to the different stages and new discoveries of his personality.  And Randy has written a handful of times as well - which I think is super special.  He wrote right after J was born and I was a bit incapacitated.  What I am trying to get at is that doing this has been a super blessing even to me.  And I trust that when J is 12 or 15 or even having his own children that this can be a neat perspective he'll have about his own past that might positively influence his future.

Now that J's older I don't write quite as often as I did, but it really doesn't take much time at all to put a glimpse of our life down on paper every month or two.  This idea, I think, is something you could do for anyone that you love or really want to communicate with but find it difficult.  The written word can last longer and brings with it time to think about what is being said, instead of thinking about how you're going to respond.  Maybe you have an anniversary coming up or you want to do something special for a mother or father's day gift.  Or even just a special birthday.  Who doesn't love getting letters and notes?
Posted by Amy Butler at December 14, 2011