A Gift, 5 Years in the Making

When it comes to internalizing a new concept (by that I mean effectively applying it to myself and living it out), I am a slow learner.  It is easier for me to discuss a concept and even apply to someone's situation than to actually allow it to impact how I think and feel.  Over the many years of being single, I had all kinds of fantastical expectations regarding marriage and living happily ever after.  Sure, it would be naive to believe that once you get married or 'find the right person' all the ducks just start lining up.  But what I did just might be worse.  I expected (sometimes consciously, sometimes not) that if I would do a set of 'right' things then Mr. Butler would HAVE to comply.  I knew it took work, but what I didn't expect was him not responding when I did everything 'right' (which we all know is up for debate anyway).  Suffice it to say, those pesky expectations can still poison a fine evening.


When some people talk about marriage you get the impression they have a disease that has no cure or lost a bet somewhere down the line.  Today I have been married to Mr. Butler for 5 years and while that's very little in the grand scheme of things, it does give me license to say what works and what doesn't for us.  Like I already said, expectations kill everything usually (because rarely do you expect the same thing). And you know what has saved us time and time again?  Sticking with it and helping each other grow.  That's really the beautiful thing about marriage.  You go into it thinking, "This is going to be soo fun!" but in reality you are entering a growth chamber.  Kinda weird, huh?   "Hey, I thought this was going to be a party." "Yeah, no.  We're here to help each other grow." Awkward.  Just this week Mr. Butler has helped me understand a few things about myself and perfectionism that have already positively affected me and our relationship.


After 5 years I'm finally learning to give way to that growth instead of fighting it when it doesn't look like I think it should.  Marrying Randy has been one of the best decisions of my life, but not because of the reasons most people expect.  He challenges me on EVERYTHING.  Some days he values everything I DON'T and has no use for everything I adore.  He is meticulous and a tough sell.  His standards are high and his emotiveness is low.  All things that, if I'd been presented with 5 years ago, I would have either denied existed or worked hard to extinguish.  But today, I love every bit of it because   my relationship with him has done more for me than I ever could have on my own.  I firmly believe God uses marriage if we allow it.  The trouble is (and I speak from experience) that most of the time we are fighting it, refusing to change and, as a result, missing out on one of the most beautiful gifts of growth. 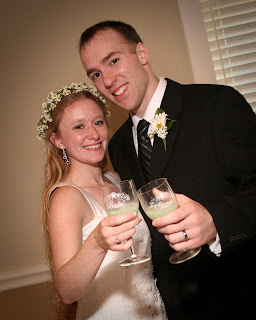