Since I haven't been feeling well lately, Randy has been very gallant in picking up the slack, especially regarding dinner.  Last night was no exception and after we'd finished eating, his return to the kitchen kind of overwhelmed him.  All the food was out, nothing had be pre-cleaned as I've better about in the last few months, it was just all sitting their waiting on us (him).  So he dove in and started cleaning up, but clearly frustrated with the situation as a whole. He told me what the problem was when I asked, but it didn't seem to help either of us.  He was not happy and let me know it.  I told him I could manage the rest and sent him off to shower.  He didn't shower, but picked up his guitar and played for the next 45 minutes or so.  Why am I telling you this?  This little minor situation could have been a ridiculous fight not that long ago.  I most likely would have done 3 of the 4 things the next chapter talks about NOT doing.  I would have absorbed his stress and obsessed about how I felt (sweating the small stuff), ignored/scoffed at his need to relieve stress through taking some time to play the guitar (letting his quirks drive you crazy), and gotten my feelings hurt b/c he was expressing frustration in the general vicinity of me (taking things too personally).  It is amazing how much holding my tongue can be the best thing I could ever do.  Anyway, the point is 'Riding Emotional Escalators', the name of chapter 7, is the fuel to almost every fight we ever have. 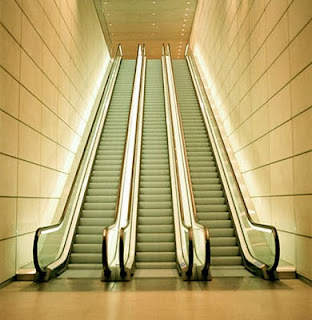 -Sweating the small stuff : Sometimes things don't go as planned. At these moments, it is common to let our emotions escalate into anger, frustration, resentment or deep depression often AT our spouse, which usually just makes matters worse.

-Letting his quirks drive you crazy: How often do you find yourself reacting negatively to your husband because of some quirk (bad with directions, takes weeks to make a decision, any number of things that just gets on your nerves)?  All quirks can have a good/valuable side, we just have to be willing to accept/love our spouse, quirks and all, instead of griping, nagging, belittling and alienating them b/c of them.

-Refusing no as an answer: For me, this one his HUGE.  I never learned respect in any real sense and so accepting anyone's no has never been a pleasing option to me. In the book, she relays a couple of situations where accepting her husband's no, first time, actually turned into a yes, b/c of how moved he was with her respect and courtesy.  In trying to accept Randy's decisions without argument, I haven't always gotten my yes anyway, but it helped me love him better and he in turn appreciated me more.  It takes a lot of effort and discipline sometimes, but this alone does more for both of us than just about anything.

-Taking things too personally: Her overall advice on this is to take your husband's words literally rather than taking them personally. Sometimes a sigh is just a sigh. If he says he's not thinking anything, believe him and move on.  The reactions we give into are usually a sign of needs of our own that would be better met if discussed outright rather than taking unrelated comments personally.  This relates well back to the game playing and manipulation we can find ourselves in.

I'm telling you every time I read from the book, write or talk about it, I become so convicted.  There is so much garbage that I can create in our life just out of emotional reactions.  I am just so thankful that I've been given the opportunity to see it for what it is and that Randy has been patient with me.  I know some people think I'm crazy, but I love learning and love actually learning to be better at life.  Hope is a great thing!
Posted by Amy Butler at March 26, 2010

Thank you for your wonderful insight. I love you!!

I think by wonderful insight you mean very foul mistakes I'm trying to learn from, but you're welcome and I love you too! :)