We Need Each Other

In some circles it isn't very hip to lean in to the differences we face in others.  Granted in some circles it isn't very hip to say hip so what are you gonna do, right? Still it bears some consideration.  I hate fighting and arguing and the awkward feelings of people in the same room that just don't like each other.  It can make me physically ill, I hate it that much.  Because I have such a negative response to conflict, I work really hard to neutralize it whenever I can.  The Bible does say blessed are the peacemakers, but it can be quite exhausting sometimes. 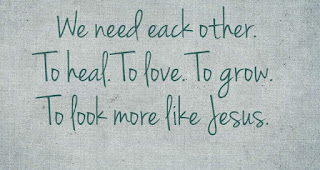 What I have learned being in that position is that everyone ultimately needs something from everyone else.  We need passion, but we also need brains and practicality.  We need caution and planning, but don't forget to enjoy your life! We need mothering, but we also need fathering.  Why? Because they are different and fill different needs. We shy away from those differences sometimes in what we think is an act of fear or judgement of that other person.  Could it be that we judge and reject others because we lack what they have in abundance?  Maybe jealousy, maybe just insecurity. We all just want to be told that who we are is not just okay, but the best.  When an elephant enters a room that suggests we aren't okay, certainly not the best, sometimes the ugliest version of ourselves materializes.

Housekeeping and detail work is not something I'm good at, take pleasure in or even think is all that important (over some other things). Perhaps if I come into your home that is very well kept and organized, a battle will likely begin in my head.  I'll be impressed by your skills and then despise them.  I'll justify my values and criticize yours.  Then I'll calm down a bit until your super well run schedule reminds me of how I fail often in that way.  Then the battle rages on.  Am I perfect and are you bad?  No, we have different skills.  The problem is that I'm insecure and when you're so different you're not validating my skills.  Ultimately I need your skills and habits to influence me to work smarter.  You might could use some influence from one of my skills. But mostly I just don't want to feel so inadequate. 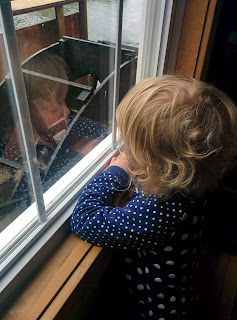 My precious daughter often thinks she needs to do most things all by herself.  Is that how you react to inadequacies in your life?  I have the tendency to just hide from the world with wild determination to be better in hopes that no one will ever see or remember my flaws because the next time they see me, all will be fixed.  But isolation can often only take us so far.  We all need to be better than we are in some areas, right?  The best way to grow is to gain knowledge of and experience in the better, whatever that might be.  Drawing closer to people who are successful at what we're lacking is a great tool, if only we'll see it as such.  Looking at a high quality finished product gives us a better understanding of where we need to change.  Yes, that probably means we have to reveal our failings, but that might just be for the best anyway.